Mentoring across cultures to deliver creativity

It’s a challenge to make the right connections when training entrepreneurial development skills in one of the poorest countries on the planet. We were engaged on behalf of Scottish Government to help build the skills-base of an indigenous consultancy in Blantyre, Malawi. Called Umodzi (the Chichewan word for together) they are a young and enthusiastic team who want to make a difference in their country.

With some of the Umodzi team in Blantyre

Sensitivity to the local culture and business norms was paramount. These are intelligent people who lack the resources we take for granted in Western Europe. We worked individually with members of their team to help them comprehend the use of psychometrics, planning frameworks and a host of other tools to build their understanding of self and their clientele. It was clear that they were capable of delivering great changes. 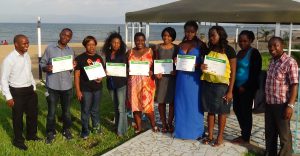 Umdozi delivered training to the Reserve Bank of Malawi

Not only did we help the team but we also got directly involved with their clients. These included the Reserve Bank of Malawi and we were glad to be able to run a session for their staff on managing stress.

Umodzi were also involved in helping start-ups to build business plans – including a bid for World Bank funding towards a proposal for renewable energy on Likoma Island. (Likoma has about 9,000 inhabitants and is an exclave just a few kilometres offshore from Mozambique on the eastern side of Lake Malawi. Its only electricity is currently diesel-generated – and that only works if there is diesel available.) We helped them challenge the mindset of simply developing a wind turbine solution and ultimately the proposal started to focus on adding in solar power to generate hydrogen from the plentiful fresh water. The result would be off-grid portable energy and replicable anywhere with sun and a good water supply – of which the tropics has plenty of both.

Overall our interventions changed minds and potentially improved the lives of thousands of people across South-Eastern Africa.